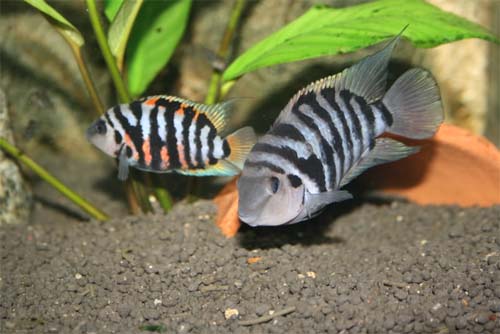 Convict Cichlid Fish are one of the common and hardy fish which is not expensive either. If you are new to Cichlids and like to try breeding them then Convicts are perfect for you.  It’s very easy breed them and even it can become a headache if you have a community tank. They are also known as Zebra Cichlids and there’s an albino type too.

They can grow upto 10-12 cm (4.0-4.5 inches) and prefer temperature around 70°F – 80°F. These guys live 8-10 years and even little bit more if they live in optimum conditions. Like many other types of Cichlids they live in bottom to middle level of tank.

Convict Cichlid fish are native to central America. This Cichlid type fish discovered and listed in 1867 and they can be found in Honduras, Costa Rica, El Salvador and Guatemala. Even though Convict Cichlids are endemic to the lakes and streams of Central America, Feral populations have been found in Australia, USA and even in Japan and Taiwan. Probably by people who has released them to local water sources to get rid of them.

They are Cichlids.  So they are born bullies. Convicts are not for your average Goldfish tank or livebearer tank. Not even for Tetra or barbs unless they can take care of them selves. They are better for Cichlid community tanks.  Other medium size Cichild fish but not with dwarf types like German Rams. Even in a Cichlid community tank it’s better keep only one. Because if you have a pair then they will decide to make babies and kill everything else in tank to make it safe for babies. If you have 2 from same sex one will bully other one to death.

Black Convicts are diggers. They will dig plants, stones, gravel and everything. Not so great for planted tank since they take pleasure to destroy everything most of the time when they are free.

Sexing Convict Cochlids is something easy unlike types like Discus or Oscar. Females have orange or yellow color in their belly area like in the image. Males do not have this.

Males grow bigger than females and if they are in a schools females usually pick the biggest one or one dominates other males. Also sometimes you can notice a lump on males head.

Unlike some other types of Cichlids like Severum, Oscar and African Jewelfish they are not very pick about partners. You can just introduce a male and female, they will soon start courting and then those mating dances. You won’t notice much aggression between them but once they get along others will suffer from their aggression. So if you want these guys better have a pair in their own tank. 20 gallon tank would be enough them even though bigger the better.